Tents pitched on a balcony and in the corner of a living room are being advertised to renters from $390 a month in one of the more outrageous signs of Melbourne’s desperate rental market.

The listings were posted on two classified websites in recent weeks. One of the tents, advertised for $130 a week, is part of an apparent illegal boarding house at the Lacrosse building in Docklands, the apartment tower currently at the centre of a flammable cladding controversy.

The Korean-language listing said the two-bedroom apartment at 673 La Trobe Street was shared between six people. Photos show part of the living room cordoned off into a bedroom space with a red screen and, in another area, a yellow tent next to a desk and what appears to be a fabric wardrobe. “Room space is comfortable,” the advertisement said. “It is a very cool (refreshing) house in the summer.” 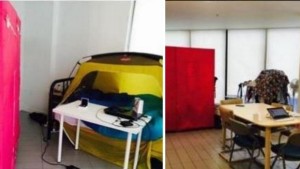 The tent in the living room of a Lacrosse tower apartment, advertised for $130 a week on a Korean-language classified advertisement website. Photo: HojuBada.
When Fairfax Media called the advertiser last week she said the space in the tent had already been taken. The new tenant will have access to the apartment and building facilities, including the gym and outdoor swimming pool.

There is also a tent for rent for $90 a week near St Kilda Road in Melbourne, installed on an upper balcony of newly built tower The Emerald. “The tent is very comfortable. It has electricity and proper thick mattress bed inside, [with] heater provided as well,” the Gumtree advertisement said.

10 year leases? Feasible or not?

If you could sign a rental lease for a decade, would you? And – more…

AirBNB is a great concept, and it's taken off all over the world. The idea…

11 questions to ask your property manager