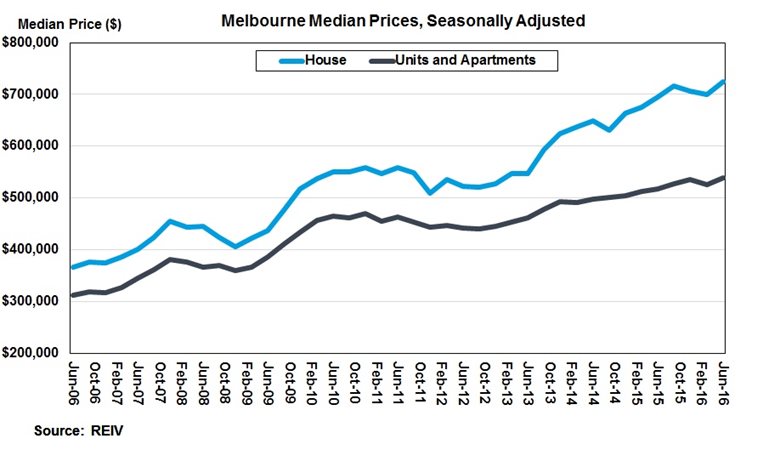 New REIV data shows there has been solid price growth in Melbourne in the June quarter, defying a slowing economy and moderating national market.

In the three months to June 30, Melbourne’s median house price increased 3.6 per cent to a record high $725,000 – the largest price growth since September 2015.

Growth was widespread across Melbourne and at both ends of the market – from Toorak to Wyndham Vale and Roxburgh Park. Double-digit growth was experienced in Camberwell, Prahran and Richmond.

“Recent national data from the Real Estate Institute of Australia shows that most states, apart from Melbourne and Adelaide, have experienced moderating home prices in the opening months of 2016.”

At the same time, Mr White said that price growth is slower than at the market peak in late 2014 and early 2015.

“Just over a year ago we were seeing quarterly price growth just above five per cent,” he said.

“While growth is now below four per cent, it is still solid, given market conditions.”

Mr White added that there have been fewer property listings this quarter, down by around 300 weekly across Melbourne in comparison to last year.

“While fewer sellers are putting their homes on the market, prices are still extremely solid,” he said.

“The message to vendors is that the market is still bubbling along nicely – and that, given the sales results and prices, those looking to list their homes should do so prior to spring. Now is a great time to sell.”

Do your maintenance in spring and save in summer!

Why you need Landlord insurance